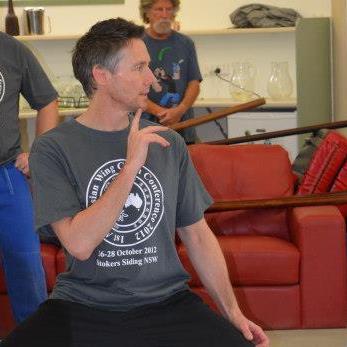 Gary’s first introduction to martial arts was in Judo and Karate in his early teens. In November 1985 (at the age of 18) he visited one of Jim Fung’s Adelaide branches and was impressed with the directness of Wing Chun. He signed up and has been practising ever since.

Gary trained under notable instructors such as Graeme Kuerschner, Albert Chong, and Tony Blencowe, each with their own distinctive approach. Their influences helped him develop a balanced study pattern suited to his own ideals and capabilities. His training was further influenced by Sigung Tsui via his early workshops in Adelaide. Several training visits to Hong Kong cemented this influence.

In the last decade or so, Gary has been passionate about moving away from the “ineffective static robotic fighting style so prevalent in Wing Chun”.

How does wing chun integrate with your daily life? What principles or movements of wing chun do you notice permeating your everyday?

General body awareness often pervades into everyday life, and anytime I try something unfamiliar or new that involves body movement, or mediative thinking, it’s difficult not to think of Wing Chun.

How has training changed for you over the last 2 years?

Not much has changed here in Perth, being lucky with lack of lockdowns.

Also, for several years now, I have spent most of my time training at home.

Any tips for training alone, or any favourite solo exercises?

Start with a plan and make it consistent. Even if it is only for five-minute sessions. Over the weeks, months, and years, it will grow.

Also start with any exercise that you enjoy. I start with a few simple yoga exercises to wake up my mind and body.

What is one thing a martial arts teacher or fellow student has said that you’ve never forgotten?

During a workshop in Adelaide in the mid-1990s, an instructor kept asking which of two “different” stepping exercises was correct.

Sigung kept nodding and saying yes to both. The instructor was confused for clearly, he was doing them differently.

But Sigung was watching the body, not looking at just the legs, and he was happy with the way the body moved in both exercises.

It was so good to see and hear that.

If you had to recommend a book, an album, or a movie for everyone to check out, what would it be? (Doesn’t have to be martial arts related)

Any movie that comes with a big bag of chilli crisps.

Any book that gets you reading.

Any album that is made from vinyl.

Thanks for your thoughts, Gary! We look forward to your workshop at the conference.