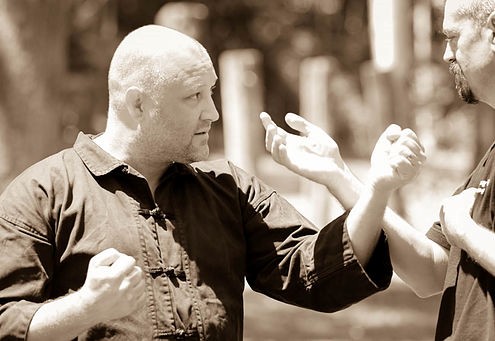 Steve Langley is the principal instructor at Kinteix Kung Fu on the Gold Coast, who are the official hosts for this year’s AWCF Conference.

Steve has been training in Wing chun for around 20 years, after starting under Jim Fung. He started, as many of us do, watching kung fu and karate films in the eighties. He spent many years training diligently in Karate before the school he was attending closed down. His friend, John, unexpectedly announced that he had been training in Wing Chun and asked Steve to attack him:

I said, “Are you sure?” thinking of myself as the big and tough one. He replied, “Go for it.” I launched a punch towards him but as soon as I did I found myself flying through the air right over the couch, I landed on my back 1O feet away from John. I said, “What was that?” John calmly replied “that was Wing Chun.”

Steve sought out Wing Chun from 1998 throughout New Zealand, eventually coming across a tiny advert advertising training with Jim Fung fulltime on the Gold Coast.

Within weeks my bags were packed and I enrolled in the full time course on the Gold Coast Australia and I’ve been training Wing Chun ever since.

Steve has been actively pursuing Wing Chun across Australia and Hong Kong, citing an impressive range of instructors from our beloved Chu Shong Tin through to John Kaufman. He values a dynamic training methods, is a qualified school teacher, and is a specialist instructor in the anti bullying system, Rock and Water.

Steve’s broad experiences across many instructors has given him a unique insight into Wing Chun, which he will share with us at the conference this year alongside our many other presenters. Stay tuned for more information!